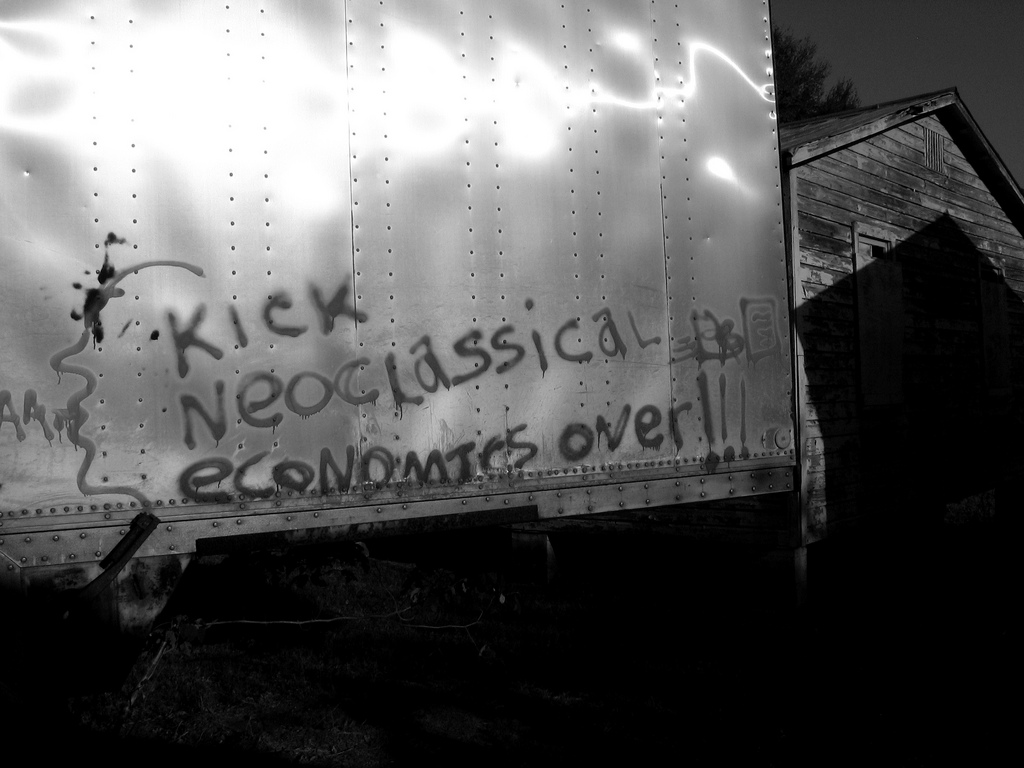 Economics in The West and UK is dominantly neoclassical. Other schools of economics are ignored to such a degree that they are comparably unknown to the voting public – who too often generalise economics as merely The City and services because that is their exposure. Economic alternatives are rare even among education courses – often tokens.

This narrowness of theoretical options endangers human development because the failings of the neoclassical style of economics can only be corrected by integration of alternatives. It skews politics also: the economy (that is the neoclassical one) is used as an inarguable defence for political policy, supported by the contradictory argument that economics is apolitical. Neoclassical economics pretends to be a science, shunning the political economy moniker and parading incomprehensible statistics as evidence, but this is wrong. Neoclassical economics, like anything outside the discoveries of natural science, is based on complex value judgements intersecting with politics.

Neoclassical economics is flawed because it judges by prices, instead of values. Ethical values ought to determine prices. But instead any economic growth is good regardless of the causes – temporary housing booms, selling of arms, self-harming resource bonanzas are regularly priced higher than sustainable technologies or urban renewal with as much rationale as ‘that is just the way things are’.

The neoclassical notion of profit is harmful because profits made from less effective, but better-marketed drugs, or profit made from loan shark companies are nonetheless bundled into the good category. Because the market does not have ethicists there is no good but profit, which runs under a guise of neutrality.

Neoclassicism puts too much trust in people as autonomous and rational. It assumes what people buy is what they want and what is good. That is not correct – most consumer demands do not fulfil higher desires; is ephemeral and marketed into fake necessity. Furthermore, it’s a waste of resources that could be better allocated and overlooks that choices are made depending on the choices offered.

Some economic indexes of ‘development’ are skewed toward neoclassicism and overlook its assumptions of wealth determining ‘happiness’, or ‘better’. Yes, not poverty but is the replacement of poverty by insatiable work competition the best solution? Measures of development are at best in gross national product (total wealth divided by population) but that does not measure how they rate their lives or work if fulfilling. The happiness of citizens should be rated over economics. While happiness, it is argued, cannot be measured – how then do we know the gross national product and massive middle-classes model routinely endorsed as ‘natural’, ‘inevitable’ or ‘neutral’ is the happier option; if it cannot be measured? Justice dictates that fairer opportunities are better, and that what is better for most overall is simply better overall. John Rawls eloquently outlined this in A Theory of Justice: if you were to choose rather than be thrown into the lottery of life which country would you choose? A more equal one with better chances.

Most problematic of all is that 98% of the population is not rich. There are the mega rich, some self-employed, some government employees, and capitalist serving wage-slaves that do not choose how they spend their hours until death, but have circumstance decide for them and the diversity of their nature allocated into fulfilling an over-specialised therefore personally unfulfilling work role. The wages of more important professions are excessive, while some of the most important like nurses are underpaid while those that do not work but own accrue excess off the work of such wage-slaves.

Fallible meritocracy advertised in ‘self-made’ riches to megariches stories like Trump ought to make it obvious it is not a lack of trying that prevents the unprivileged going from rags to riches. The better direction to take is toward a fairer egalitarian economics. For that to occur successive generations must be taught better, differently. Since new beliefs only catch on after those that have treated them as givens for their life die off – new beliefs catching on in younger education is vital to the project. The teaching and research of Marxist, Keynesian, Schumpeterian, Institutionalist, Developmentalist, Friedman’s, and Austrian economics along with neoclassical and classical is the best – and frankly more democratic – course of action to redress neoclassical problems in the slow process of bureaucratic change.

In this, I agree with Ha-Joon Chang (of the democractic Economics: The User’s Guide

) A good economy is a mixed economy that is fairer: that such mixed-economy countries cluster at the top of the United Nations Happiness Index is not incidental. The course forward is through academia and teaching but also in simplicity, in principles – fairer wages, ethical and useful profit, educated and reasonable demand, comprehensive recognition of collective well-being over misdirected measures out of misdirected notions of progress.

This piece was first published in the Norwich Radical

One thought on “Economics Is Politics By Other Means”