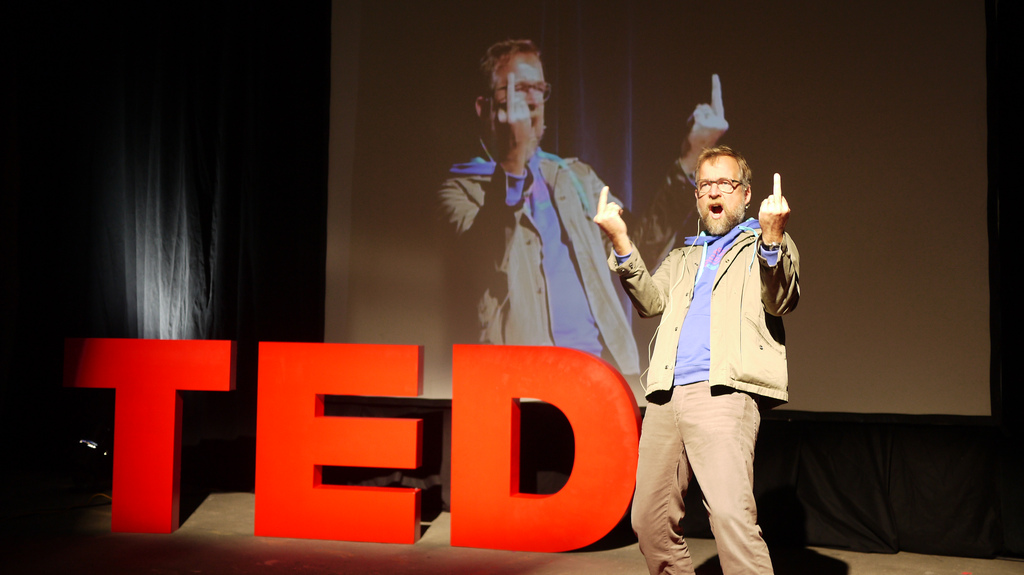 Speeches are wonderfully engaging, in a way written words rarely are. Video content is memorable, massively consumed and shared because it is effortless to take-in a speech by an academic or celebrity about an issue–they keep it interesting, dumb it down, make it worthwhile. Aristotle who wrote The Books (mostly as lectures, which Ted talks essentially are) on Logic, Rhetoric and Poetics, endorses rhetoric as a means to convert the masses to the right causes. So long as the rhetoric – word marketing – was turned to a good outcome it was for good. In this, he disagreed with Plato who believed logical rigour was most important — for Plato a better world requires us to all be Socrates and speak in Socratic dialogues where we reach the best conclusion through back-and-forth debate and shunning (theoretically) persuasion.

Both Plato and Aristotle are right. It would be best for us to all be more like Socrates, logical and doubtful, but Aristotle is more plausible about an audience and the relationship that comes with being spoken to; not a back-and-forth discussion. Rhetoric – word marketing – is inevitable, but whether that marketing is good depends on whether its outcomes are good.

Such is the danger of Ted talks, where rhetoric succeeds over logic. In the written medium criticism and negative comments overflow but with video content the intimacy of the medium and the authority of stage silence people into passive absorption and acceptance. Sometimes because of the entertainment of it, they are tricked into believing they have learned something; when they have merely experienced engagement. Public intellectuals like Susan Jacoby in The Age of American Unreason

have long criticised what she calls “video infotainment” but gone unheeded. Probably because she never made a youtube channel to popularise it.

Rhetoric is made of ethos, pathos and logos: that is how likeable the personality, how emotionally rousing, how cogent the argument seems. Ethos and pathos can be used to persuade people when the argument is nonetheless wrong and therefore it is dangerous. For millions of viewers to see people with the authority of Ted behind them allows for insubstantial and sometimes false ideas to catch on–in which case they are definitely not worth spreading. (Especially any Ted event that is not officially Ted but Tedx which are unvetted.)

The success of the videos is detectable within a minute. Amanda Palmer does the unexpected theatrics of standing on a box and making the crowd uncomfortable (likeable ethos); Tim Ferriss puts an emotive background image of his younger apparently pre-suicidal-thought self and lets that hang in the air (sympathy grabbing pathos); Sir Ken Robinson does a positive question with raucous joke “How are you? It’s been great, hasn’t it? I’ve been blown away–in fact; I’m leaving” (humorous ethos). These all equalise the figures while keeping the stage authority to dictate. One is charmingly bold, the second severe and serious, and the third hilarious. To avoid falling for the rhetoric simply fragment the viewing experience by skipping through the videos, and skimming through the transcripts for facts or new knowledge.

I do enjoy Amanda Palmer’s work, in particular with The Dresden Dolls, but that you can make it as a successful musician by relying on the generosity of fans or even strangers is misplaced. It overlooks that promotional labels give the opportunity and necessary exposure for her fanbase to exist in the first place. It is easy to rely on generosity when you are already an outlier celebrity on social media. For her to recommend listeners pay what they want for music and musicians just muster the courage to ask for help to become a successful musician in the industry is overlooking the causation of how she herself became a successful social media personality and musician; snubs the industry that made her. ‘The Art of Asking’ works for her because they are not strangers but already fans: people are generous to celebrities, not the ordinary talented musician. Talent does not speak for itself if too few ears hear it.

Tim Ferriss uses lots of pictures and personal anecdotes to reiterate what Stoics like Seneca said 2000 years ago. The pre-thinking of evils – premediato malorum – was to prepare you for if things go wrong. Essentially this is to have contingency plans around what can go wrong. He says: my business could go wrong when I went away to Europe, but I wanted to go to Europe, so I came up with a plan of action if it did go wrong. That’s not profound.

The appearance of a likeable personality and pathos of his misfortunes – despite being an incredibly successful marketer that went to Princeton – we are more vulnerable to believe the words are worthwhile or new because of rhetoric rather than argument. Planning for fears instead of goals is intuitively known, and merely an inverse of goal planning. Whether planning goals in this way is for everyone is taken for a given because it is merely said, not proven or convinced or even well argued, but assumed with dramatic pauses.

Sir Ken Robinson uses his humour to get people to agree and like him, but he makes mistakes in his presentation like “the world over the hierarchy in schools is mathematics and languages, then humanities, and comes last is the arts” – that says nothing new and is incorrect. Schools do stifle creativity, but we already know that. One can cover what he has to say in practical terms by looking at the best education systems such as in Finland – children are given freedom to grow to their own suitabilities rather than to fit an economic cookie cutter. Schools like Steiner already promise that, and are not always as effective as he would make out. But it is in his vested interest to promote himself and these thoughts as groundbreaking, while also having the appeal to the audience of ‘common sense’.

The best Ted talk is a satire of the rhetoric that does have a valuable point, and educates in good public speaking at the same time. Empty words said well, are the most subtly dangerous of all. Watch without the volume, and it could be a great talk. With the volume, it is one of the greatest because it gives you nothing – which is itself a rhetorical lie. The “nothing to give, nada, zilch, zippo’ is the best lesson on offer.

One thought on “Ted Talks And Their Ideologies”