SASSY SOCIALIST MEMES is a Facebook page dedicated to socialist-themed memes. The page boasts a million and fifty thousand likes, which may at first suggest an appetite among young Facebook users for far-left politics. The so-called fathers of communism, Marx, Engels, Lenin, Stalin, Mao, and Castro populate the page; they feature, often, to satirise contemporary politics via esoteric memes. Some memes mock The United States’ domestic policies hampering effective welfare provision; another the separation of racist mistreatment from socio-economic biases; another the American ideal of the self-made man being attributed to Trump’s “small loan” of $1,000,000. Yet this page far from embodies what Marx meant by spreading the word to the ‘oppressed’ masses—to inspire change, a revolution.

Rather than a satire on current capitalist economics, Sassy Socialist Memes is more a satire on would-be socialist economics; a satire on making massive change happen at all. Making memes out of two tyrants like Mao and Stalin, frenzied Castro and Lenin, and superimposing sunglasses onto Karl Marx’s portrait and a cigar into Friedrich Engels’ mouth is the opposite of socialist reverence. 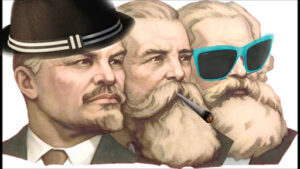 It raises the numbers of users familiar with some icons of socialism, yet reinforces the status-quo. The interchangeable misuse of the words ‘Socialism’, ‘Marxism’ and ‘Communism’ as though the ideologies were identical is telling; the purpose of these memes is not to, even incidentally, propagandise alternative political-economic ideas, but to make jokes at the ideas’ expense.

What makes the memes funny is the juxtaposition of the serious and the frivolous. Thus, Homer Simpson becoming a union leader being reinterpreted as his communist sympathies is amusing. We (may) laugh because of the conjoining of high communist belief with the low entertainment of a household-name cartoon. Homer Simpson, after all, is the least likely communist.

The meme is made funnier because such an interpretation is obviously forced, and more read-into the episode than deftly read-out of it. Contrary to endorsing socialist “sass”, itself a weak word, this implies a suspicion of sideline political agendas: where socialist ideals are comically projected onto reality, rather than being scientific or properly representative of it. The Simpsons is typically popular whereas communist unions are a declined rarity; the blending of two by noughties and nineties meme makers, and consumers, seems inevitable given the chaotic network size of the world wide web.

Yet how much does the absurdity of pop icons merged with socialist jokes attribute absurdity to ‘socialism’ as it is known online?

Contrary to mobilising the left against the right, Sassy Socialist Memes advocates doing nothing but getting-by with a smile. When humour can be made of The Cold War, gulags, nuclear war threats, climate devastation, and the analogue between historical events like the October coup and the famished hobbits of The Fellowship of The Ring movie—we live in interesting times. Times with comfy performative political action, and the bourgeois accepted. For the most part, making jokes about the scare tactics of the United States and the urgency of equality is admirable, especially in exposing contradiction. 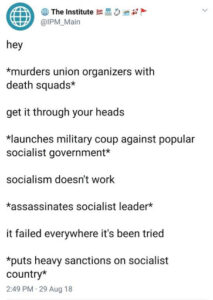 Yet these memes are also melancholic: they wryly admit just how powerful The United States is and will continue to be, and how implausibly ambitious absolute equality would be to actually achieve.

Sassy Socialist Memes while superficially appearing to satisfy an appetite for far left politics and its economic entailment, endorses the opposite view, that of economist Fredric Hayek. The political-economic system is so chaotic it is best to leave it as much alone as possible rather than to intervene for revolution. There is too much information and too many out there to mobilise massive change. We might as well enjoy what we get. We are doing alright, and we are well entertained.

One thought on “Do Socialist Memes Mean The End of Socialist Hope?”