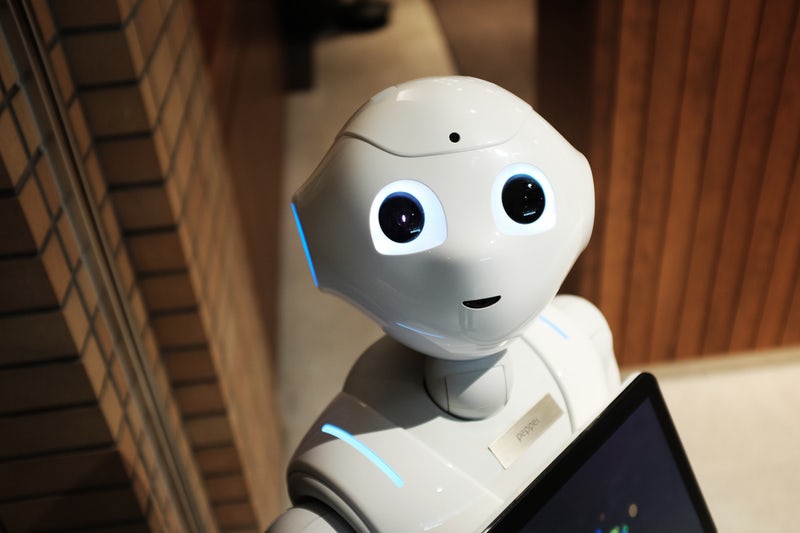 In Roald Dahl’s Charlie and The Chocolate Factory, Charlie’s father has a steady job: putting caps onto every toothpaste tube delivered on his conveyor belt. The routine drudgery Charlie’s dad is grateful to perform is displaced. Charlie’s dad loses his job to a robot able to affix more caps-per-minute; sparing factory owners’ labour costs. Happily, Charlie’s dad manages to retrain as a mechanic who mends toothpaste-affixing robots. Dahl’s children’s’ story demonstrates the interplay of economics: the substitution effect, where machines replace humans, and the complement effect, where humans and machines collaborate. Historically, too, the story has run like Dahl’s, with substitution effect and complement effect. People lose livelihoods and in ceaseless creative destruction—the old capitalist dialectic of de-vestation and of re-creation—workers are shuffled into new jobs like cards reshuffled in a deck. New, quick, efficient, games come into play, and a new order begins. 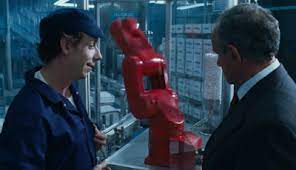 Mr Bucket serves the toothpaste machine, which serves the factory owner. Charlie and The Chocolate Factory (2005)

But you might have heard more about substitution, the robots ‘stealing’ our jobs. The narrative proceeds like this: as machines outperform their human counterparts and take their jobs, unemployment will rise to such an extent that solutions, like universal basic income (UBI) or universal basic services (UBS) will become essential. UBI amounts to a cash transfer to every citizen unconditionally and universally; UBS amounts to services rendered to every citizen unconditionally and universally.

Voila, here be socialism! Because if there are no jobs, then people cannot work to earn their daily bread—bread, or the means to bread, will have to be arranged by a state, or communities pooling resources to make ends meet.

The worry about machines taking jobs has a long history. In 1589, William Lee invented the knitting machine, thereby replacing knitters. “Consider thou what the invention could do to my poor subjects. It would assuredly bring to them ruin by depriving them of employment, thus making them beggars”, decreed Queen Elizabeth. She thus refused to commission him a patent. Oscar Wilde lamented in 1891 that “One man owns a machine which does the work of five hundred men. Five hundred men are, in consequence, thrown out of employment, and, having no work to do, become hungry and take to thieving. The one man secures the produce of the machine and keeps it, and has five hundred times as much as he should have”. The (in)famous Luddites smashed the machines that deprived them of their jobs and thereby their daily bread. These stories tell a tale of replacement. Knitters lose jobs to machines; factory hands lose jobs to machines; weavers lose jobs to machines. But, the economic theorist reminds us, history has worked more like it did for the fictional Bucket family: Mr Bucket got a new, and better job. ‘Sure, there are losers in automation but there are winners too’, they might say. However what worked out for Mr Bucket might not have worked out for his colleagues. Afterall, how many repairs do toothpaste cap machines demand?

There‘s the rub: Mr Bucket has a job, but if it pays by the hour he will lose out overall. We tend to think of job-versus-no-job, but the real world tells a different story. There is the rate of employment in partial work—the gig economy where people work intermittently and precariously. In such a world, filling in periods of unemployment in ubiquitous forms fails to make sense, since unemployment is the default rather  than the aberration – one is unemployed from Monday to Wednesday, employed on Thursday for a gig or commission, and then again off from Thursday to Sunday, or the reverse of that pattern, on any given week. Being ‘in work’ makes less sense as people do work on occasion rather than the historic tasks commanded of workers in factories or employees in offices each and every day.

Economists have declared how predictions of robot takeovers are fanciful. Larry Summers, for example, who served on President Obama’s board of economic advisers derided stupid sociologists for thinking jobs would be lost to machines. Summers declared of his debating days at MIT that:

There were these smart people who were exemplified by Bob Solow and there were the stupid people who were exemplified by a bunch of sociologists. And the stupid people said that technology was going to remove the jobs and the smart people said, “Well the technology will remove the jobs. If there’s more productivity then people are going to have more money and if people have more money, they’re going to spend it and then everybody’s going to be employed. And so, it’s like the Luddite fallacy to think that technological progress reduces jobs.

Yet just as Kennedy had said in 1963, Obama said automation was among the greatest challenges of our time in 2008, newspapers have periodically bemoaned automation too. And Summers even admits he was wrong. Keynes predicted working weeks around fifteen hours, Summers said, and he has it about right. Keynes predicted less work—not fewer workers—with machines, and that is the picture taking shape right now. In Greece for example people are hardworking, they work the longest hours in Europe, but Greece is less ‘productive’ than its peers. Germany with fewest hours has the highest output. Germany keeps Greece in debt to Germany, often bemoaning, as Angela Merkel did, that Greeks’ lax work ethics are partially behind the differing successes. And investigations from, say, the Organisation for Economic and Cooperation and Development (OECD) bear out this fact as a general truth: fewer working hours and fewer work opportunities happen as countries develop.

So, while the complement effect has held true so far, the substitution affect also holds true. Jobs remain but work opportunities are ever rarer. Therefore there is a good case for universal basic services and universal basic income to remedy automation. This movement might be equalising—for the value comes not in owning the machines at the Chocolate Factory nor in owning the machines at the Toothpaste Factory but in eaters and brushers—consumers—having demand for them. Automation therefore does indeed throw the gauntlet down for a revived socialist democracy movement, such as Americans’ Social Democracy—which predates liberal Sweden and liberal Norway. John Dewey’s pragmatist intelligentsia and Franklin Delano Roosevelt’s repairs to the financial system during The Great Depression instantiated the welfare state from coast-to-coast. But the apportioning of value will play out with different regimes converging on different ends.

Historically, economic development has followed a pattern: agriculture to factories to services. In London today, for instance, a lot of jobs are marketing and finance instead of phone production, as in Nanjing. And people in China now are transferring to cities and factories on the way to becoming competitive in services and manufacturing. Where that path will head with mechanisation, where skilled and less skilled jobs alike are overtaken by machines is pessimistic to foresee. Banking, the stock exchange, material goods are exchanged between countries, but the wealthier nations and their wealthy people dominate such exchange by merely and legally owning more.

Stands to reason, then, that it will be the same in widespread automation: there is no capitalist reason to share with the unemployed or impoverished, only social obligation and moral dignity.

The scale of mechanisation making so many jobs redundant will upend the world. Luddite protectionist policies where machines are prevented from taking jobs as in Bill Gates’ proposal for a robot tax, or people being jobless yet provided for seems to be the hopeful results. Both of these are government-led and will be, of course, debated; the real fear is a country breaking the rules to get ahead and then spinning out of control, much as renegade nuclear weapons have teetered on the edge of disaster in North Korea. If a country can produce more stuff to sell elsewhere then it can become profitable for the owners, but disenfranchise the workers.

There are voices that say robots will create new jobs for humans, but without much suggestion as to what they could be since relying on past, and present, trends assumes that trend will come to an end in the way this just might fail to. The displacement of workers has multiple possibilities. Socialism with abundant resources limited to keep everyone working for their upkeep; communism with abundance allowing everyone a life of leisure; corporate dystopia where owners sell products without having to pay, or distribute to, the workers. As Stephen Hawking, the eminent physicist, lamented in 2015:

If machines produce everything we need, the outcome will depend on how things are distributed. Everyone can enjoy a life of luxurious leisure if the machine-produced wealth is shared, or most people can end up miserably poor if the machine-owners successfully lobby against wealth redistribution. So far, the trend seems to be toward the second option, with technology driving ever-increasing inequality.

Some would argue that Hawking’s use of the conditional tense was misleading. In sheer capacity we have the resources to end poverty already, just not the organisation – or the wherewithal.

As capitalism came from technological forces – the industrial revolution – perhaps this machine revolution will be its end as we know it.

Afterall, all good things, and bad things, come to an end. But how will we know the end, when we see it?