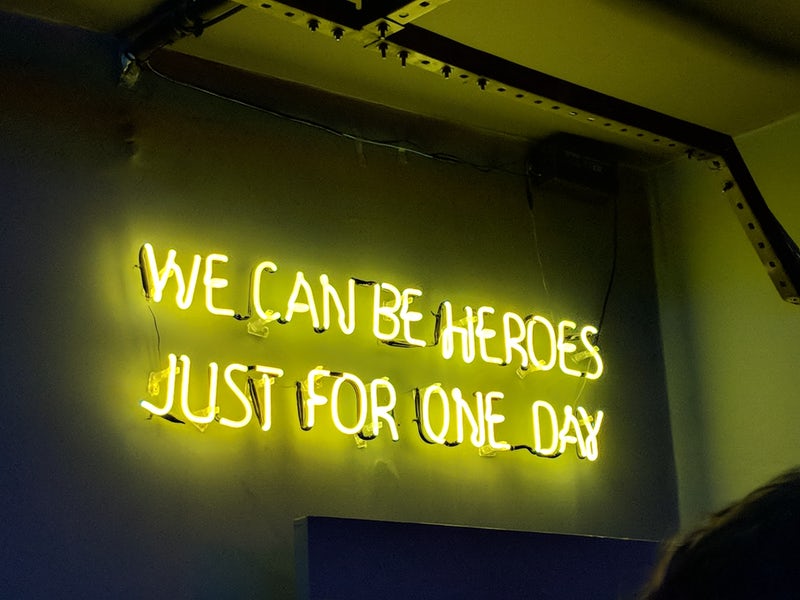 Fans of David Bowie think of the musician, but as he admitted in infamous, often Playboy, interviews he never considered himself a musician as much as an artist, entertainer, actor.
What made him great was collaboration (Mick Ronson, Nile Rodgers, Brian Eno, Earl Slick) and his lyricism, his ever-pushing desire to be new. His songwriting and personae are what made the difference between the self-titled, underwhelming, David Bowie album of 1967 and his later works of genius.

Words made him and the inspirations are traceable in his songs and interviews, from all the readings he did. That is why his book list, curated by curator of the David Bowie is exhibit of years ago, amazes; that, and the zeitgeist the selection provides of the second half of the 20th century. Of the 42 of a 100 I have read, every one has been worthwhile, mind expanding and pleasurable. David Bowie shelves pile up almost like a shrine, a shrine I justify by the Bowie Reading Challenge–how many have you read? How many will you? Thankfully curiosity has libraries, but unthankfully I yearn to own all the books he did.

On Having No Head: Zen and the Rediscovery of the Obvious, Douglas Harding (1961)

Inside the Whale and Other Essays, George Orwell (1962)

The Sailor Who Fell from Grace With the Sea, Yukio Mishima (1963)

Journey into the Whirlwind, Eugenia Ginzburg (1967)

The Master and Margarita, Mikhail Bulgakov (1967)

The Sound of the City: The Rise of Rock and Roll, Charlie Gillett(1970)

Bluebeard’s Castle: Some Notes Towards the Re-definition of Culture, George Steiner (1971)

The Origin of Consciousness in the Breakdown of the Bicameral Mind, Julian Jaynes (1976)

Writers at Work: The Paris Review Interviews, ed Malcolm Cowley (1977)
In Between the Sheets, Ian McEwan (1978)

A People’s History of the United States, Howard Zinn (1980)

The Life and Times of Little Richard, Charles White (1984)

Nowhere to Run: The Story of Soul Music, Gerri Hirshey (1984)

Beyond the Brillo Box: The Visual Arts in Post-Historical Perspective, Arthur C Danto (1992)

Kafka Was the Rage: A Greenwich Village Memoir, Anatole Broyard (1993)

Comics, painter books, O’Hara’s poetry, song lyrics, writer interviews, political history, vague psychology, LGBTQ+ historical fiction, Japanese folk tales, cultural criticism, art criticism, soul music biographies; all feature. Curiously, no Sontag, no Stanislavsky, and no books maturer than 1945, make his cut. As with so much of – “the mask is the face” – these choices reflect a deliberate desire to impress variety and novelty; if his album selections are anything to go by these choices are eclectic bravado, and reflect only part of his intellectual diet. A part that probably suggests more whole than there really is–1984, A Clockwork Orange, are as expectantly inevitable as The Beatles or Nirvana are in album lists.