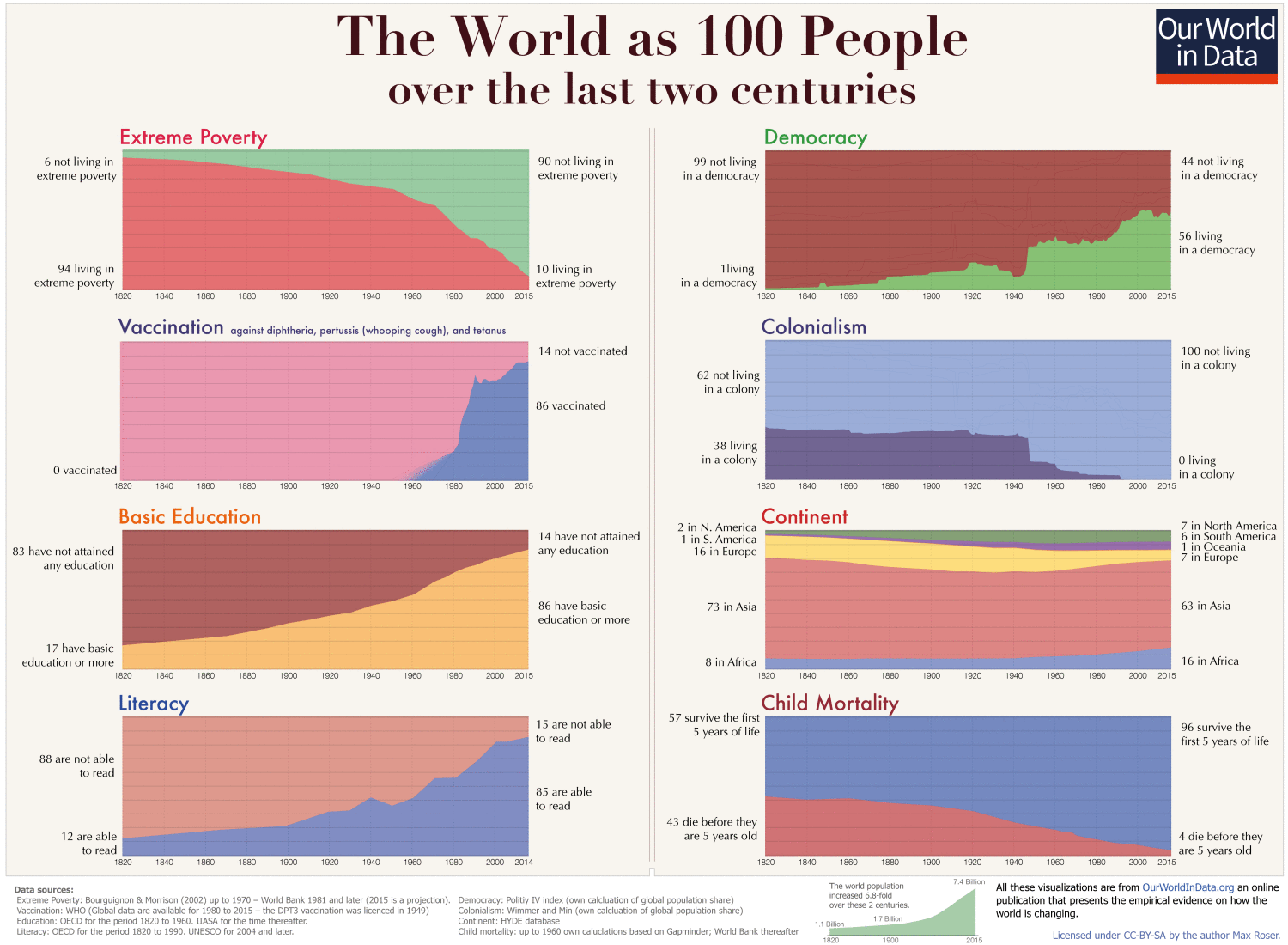 I have been asked to write on how tech influences inequality. The online feeds give the impression tech is good, whereas similar talk of the 1% suggest tech is bad. To much chagrin, I think neither is correct. The picture is more complex than that, as I write below:

This headline’s question bears assumptions. It takes for granted that inequality is a solvable problem, and that science affects inequalities for either better or worse. This picture is too simple. Equality is a recent social virtue, and achieved more in principle than in practice. With 7,530,000,000 people there are 7,529,999,999 ways to be unequal. Previous civilisations valued social disparity for the hierarchical stability it gave (like Han China), but the proliferation of liberalism makes us take equality for an axiomatic goal, a good one; despite the reality that entropic disorder ensures no permanent equilibria; only mitigations rather than a solution is possible. (I’d rather the world was more like Scandinavian countries but even life there is never perfect.) The conjunction ‘or’ within the question also asserts false dichotomy. Precisely because equality has no permanent equilibria but differing contextual rates, science and technology is both a means to increase inequality and to increase equality; raising absolute equality worldwide while raising relative inequalities within many developed nations. A proper weighing of monetary pros and cons reveals that well-managed science offers more utilitarian solutions than problems albeit with perennial downsides.

The world in 2019 is more equal than in 1919. The poverty line has receded, to align more equally with the rest of the well-off world. Between 1990 and 2015, 127,000 people escaped poverty every day. Most notably in China which ignores Washington Consensus norms. (Norms whereby developing countries are pressured to copy the developed countries of ‘today’ instead of how they developed ‘yesterday’.) Yet developed nations’ middle classes, like Britain, are squeezed; actually, though that adds to equality since as developing nations’ livelihoods improve the developed no longer improves out of tandem. The 2008 developed-world recession perversely added to world equality, bringing developed country incomes closer to developing. Equality cuts both ways, up and down. Here I highlight trends of risen equality more than inequality because poverty reduction is the most inarguable data. And disparities between the middle classes and richest does not inevitably follow to worse economies, illness, or rebels: Hong Kong and Singapore are fairer, healthier, and wealthier societies with substantial income inequality compared to more equal Poland and Ukraine. As for examples of science being an equalising force: as billions more share toilets and soap and contraceptives than before, that is an inarguable form of bottom-line equality. The divergent inequality rate in the developing world, like China, is also the sole proven way for most to improve while others inevitably lag. Hence the largest poverty reduction ever.

Political and temporal bias affects transatlantic researchers’ worldviews; living with neoliberal austerity and megarich per cent inequities colours universalist interpretations. Thus Virginia Eubanks and Susan Cozzens rightly claim tech and misdistribution creates inequalities, which I go into below, but let us not lose sight of the basic equalising effect of soap, contraceptives, and plumbing. To the contrary of transatlantic researchers, tech isn’t defined by being new or digital or by fashionable valley associations. And neither does inequality within countries follow to more inequality globally – between countries things have been improving at the bottom line of, for example, medical technology. Medicines and treatments are becoming more equally shared to all than ever before. Moreover, the austerity that embitters transatlantic researchers – and the lives of unfortunates – need not be permanent. Economists like Joseph Stiglitz offers alternatives; indeed most economists are coming around to not balancing the imaginary books. Comparable countries to the UK and the USA, also, offer more equity. Consider Germany for a hopeful example. The claims of a hollowed-middle-class from middle-class people online and from academics like Thomas Picketty are bad, yes, but exaggerated.

Local voters, Thomas Picketty and Susan Cozzens offer a biased sample: by looking at individual countries they omit the absolute worldwide sample, overlooking that the 1980s’ onward middle classes’ wealth has been redistributed to poorer countries, forming middle classes there. Even middle classes’ wage stagnation in the west does not pointlessly slow average westerners’ incomes: the cost of their buying and leisure is lower because it is manufactured and served by foreign beneficiaries. Outsourcing, too, is seldom zero-sum loss. Western wages are more matched to consumption than acknowledged in debates like those between Deidre McCloskey and Noam Chomsky. Welfare spending, too, following Wagner’s ‘law’ increases with national wealth. A bigger pie means bigger slices, despite some gaining more at these servings. Thus inequality today is more about rates between raised Asian middle classes and rich owners rather than the decline of western middle classes. This optimism granted, let us move onto downsides.

Improvement or progress is messy, contingent, and socioeconomic status important to how science and innovation improves and hinders lives. Consider the most explicit projects to better wellbeing: drugs research. Pharmaceutical companies contribute a mere 25% of new drugs yet charge high prices. Despite taxpayers’ money funding the 75% of new drugs, stocked in NIH laboratories, that Big Pharma develops and retails for profit. Drugs research even mistargets salient maladies like AIDS, 30 million sufferers, instead of sunk maladies like intestinal worms, 1 billion sufferers. The latter is tough because precedent and infrastructure determine research, and effective altruist logic is difficult to put into practice. Still, childhood infectious disease deaths are falling to equality worldwide. Structural biases do persist whereby some are privileged over the many; the wealth of stakeholders in Big Pharma by itself is no problem though; the lack of redistributed taxation or lower drugs prices is the problem. Stable economies, wellbeing, and productive loyal citizens do depend on good accessible healthcare. Stricter policies on drug distribution, already in place in Germany, are demanded. As is reform of who benefits from intellectual property whereby the public sector funds discoveries at a loss whilst the private sector develops these discoveries to patented profit. Even geography leads to relative inequality whereby the per capita spread of healthcare and accessible drugs is shunned for the gross product—within America, not just between America and Nigeria. Nationalised healthcare systems work better, economically. As beguiling as ‘competitive’ medicine and new robotics are, they actually mislead one to think things are getting better for all when few enjoy liminal benefits. Somehow, however, science is misconstrued in legislation and popular imagination as transcending geography in a stateless realm, when technologies actually multiply inequalities.

Silicon Valley, for example, is but one valley yet concentrates the global wealth generators, Alphabet, Apple, and Microsoft. Over 100 companies light The Bay Area nights. They employ few high earners tentatively who can afford expensive houses and the time to gain outliers’ technical knowledge. Yet these companies accrue disproportionate wealth. Science and economic policy is well accustomed to regulating land property, breaking up factory monopolies, but not hypothetical futures, data, and globalist exports. Thus tech monopolies accrue more money than previous monopolies did without intervention—due to lobbying and leveraging captive audiences. Their having massive wealth by itself does not lead to more crime, illness and unstable economies. Rather, the mistaken dependence of the United States subsidising them while they evade tax, and state-land rents, does. Digital technologies so the narrative goes, are apart and different from other utilities. Contrary to an autonomous science and technology, however, human agency is shaped by machines. As Sheila Jassanoff and Martin Heidegger have argued, causation between tech is never linear. Tools affect tool users, in a circle of co-production.

Science offers solutions and creates new problems. Science and technology is both a means to increase inequality and to increase equality; raising absolute equality worldwide while raising relative inequalities within many developed nations. Currently, the compromise is poorer classes gaining in developing countries whilst western countries’ masses slows. While raising the bottom-line is worth it more social-democratic management of science is demanded. The trajectory of developing nations is toward the developed nations’ lifestyles. Thus developed world problems, like work insecurity, impoverished obesity, homelessness, representation, and tech anomie, are to become the baseline problems for everyone. Good politics with tech provides solutions; worse politics with tech provides problems.

Feldstein, Martin. “Underestimating the Real Growth of GDP, Personal Income, and Productivity.” The Journal of Economic Perspectives: A Journal of the American Economic Association 31, no. 2 (May 2017): 145–64.

Jasanoff, Sheila. States of Knowledge: The Co-Production of Science and the Social Order. Routledge, 2004.

———. “Science to the Rescue or Contingent Progress? Comparing 10 Years of Public, Expert and Policy Discourses on New and Emerging Science and Technology in the United Kingdom.” Public Understanding of Science  27, no. 6 (August 2018): 655–73.

Wilkinson, Richard, and Kate Pickett. “The Spirit Level.” Why Equality Is Better for, 2010. https://www.researchgate.net/profile/Lyndsay_Grant/publication/259854638_The_Spirit_Level_by_Richard_Wilkinson_and_Kate_Pickett/links/5a7b18a8a6fdcc3774881772/The-Spirit-Level-by-Richard-Wilkinson-and-Kate-Pickett.pdf.