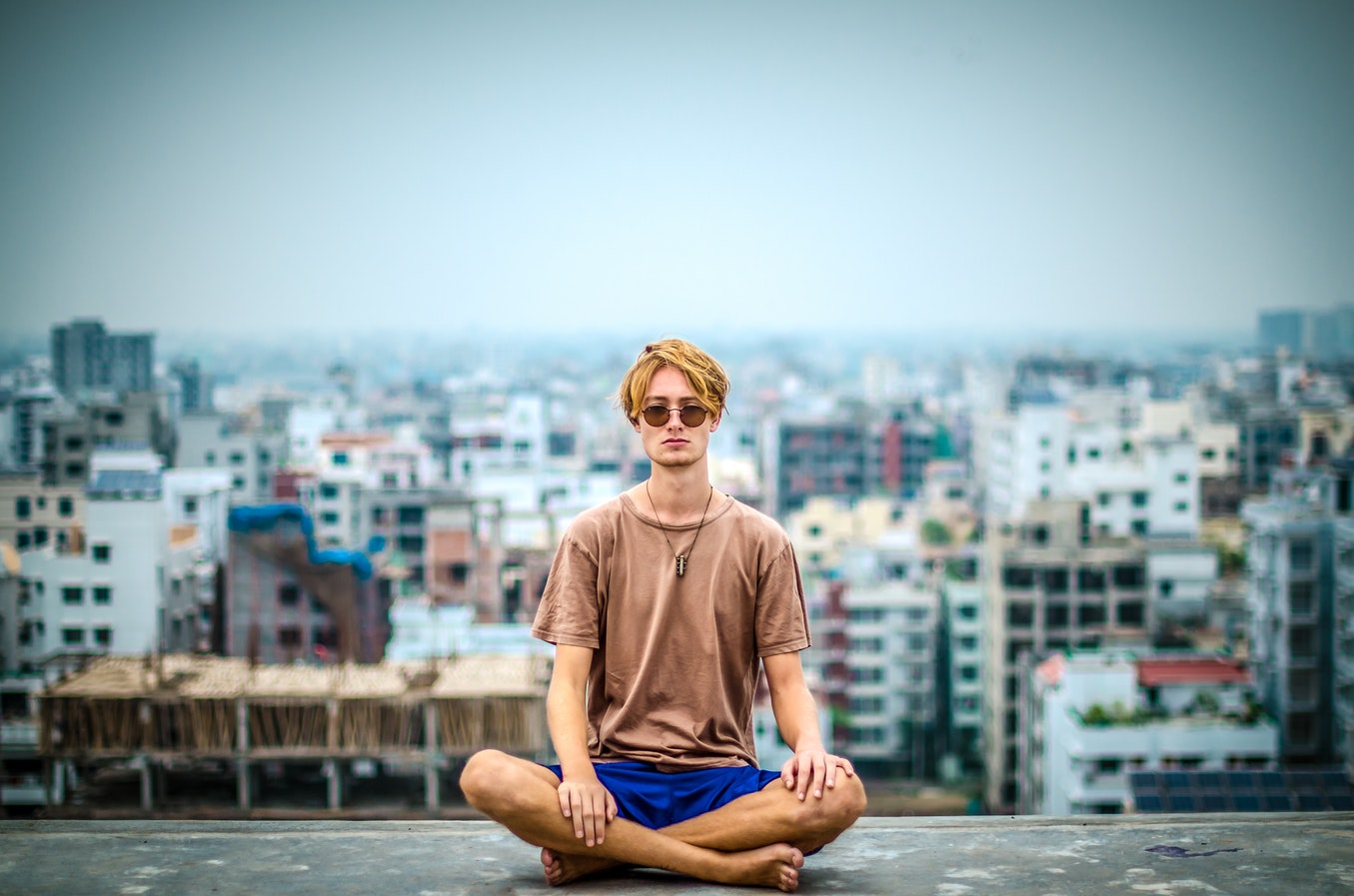 ‘Meditation’ is so general a word it is best defined by what it is not. Meditation now means a form of attention exercise for wellbeing. Mediation is not thinking through possibilities, judgements, opinions or even reacting to facts. The exercise is focusing on acceptance and being rather than on doing.

Instead of the common belief that mediation is about control, which denotes suppressing thoughts, it means distancing your thoughts from the ordinary chatter of the mind. It is about encountering the self that we tend to become too focused upon, as merely a series of thoughts and images that do not need any labelling or fixing or any other problematic cause of stress.

Meditation is about being as objective with the self as possible; to alter our flow of thoughts by playing a game with the mind – one where you practice relating to your thoughts and self generously, as though you were not you; but a friend. And as with any means of changing your habits brain and mind – it takes time. But time can, in a way, be added to our lives by the promising psychological benefits of meditation practice: the time spent on alleviating stress enables one to be more efficient and better at time management.

The point of meditation can be as diverse as experiencing oblique insights, blissful mind alteration, perceiving the world attentively. Even purely a letting-go into a relaxed free association. Meditation varies, there are innumerable kinds. The varieties include:

· Widening awareness
Contemplating the world as a whole, and your humble place within it
· Focus
Focusing on a single object in the room or a single idea and coming back to it whenever the mind wanders.
· Emotional Regulation
Separating oneself from negative self-chatter, the 300-1000 words the inner narrator narrates—labelling emotions as the peaks and troughs of being alive rather than definitive.
· Emotional Compassion
Compassion is good. Compassion for others is brilliant, and compassion for yourself is brilliant also.
· Repetitive Movement
Performing an action again and again as occurs in Tai Chi, dance or similar activities can warp and relax our minds into being ‘in the zone’. What psychologists call ‘flow’ where time pleasurably flows by.
· Mantra
Saying or chanting a phrase of encouragement or worship aloud again-and-again. For example, in Kritan Kriya you move your fingers to your thumb in sequence as you chant sa-ta-na-ma
· Prayer
You equip your voice to address God, the universe, the dead or whomever.
· Visualisation
You envision a thought experiment of what it feels like to be a rock, water, and try to ground yourself by that imagination—to gain their resilience. Similarly, you can visualise relaxation or yourself from afar in a pleasant third person.

The online conversation around meditation is just plain confusing. Instead of meditation people should expand their vocabulary of forms–to the ones above–in much the same way you would not invite or inform someone about a film by saying “it’s a film”, one ought to specify the genre and its qualities, its positives and negatives.

The reason mindfulness has become so popular – and the default genre of meditation online is because it was the first to demonstrate fMRI benefits in the brain after just a month’s participation. While any of these meditations can be fulfilling, after-all it is psychological as much as neurological, perhaps start there – with the proven mindfulness which is ergo more motivating.

From The Guide to Brain Fitness: How to Optimize Brain Health and Performance at Any Age

Recently we uncovered an important mechanism by which a month of mindfulness (about 11 hours of practice, 0.5 per day, 5 days a week) improves attention and self-regulation. (Tang et al 2010; 2012). This mechanism is a change in the white matter that conducts signals into and out of the anterior cingulate gyrus. The anterior cingulate is an important part of the system by which we can voluntarily regulate behaviour. After two weeks of meditation, the improvement seemed to involve the number of fibres conducting information. This improvement was related to a more positive and less negative mood self-reports. After 4 weeks of meditation improvement in the white matter involved changes in the myelin that provides insulation to the fibres and thus further increases the efficiency of the network involved in self-regulation.

Antoine Lutz (2004) have shown that in very experienced meditators (that is 10,000+ hours) there is a high degree of gamma activity in the brain and greater gamma power with greater experience. Gamma waves are related to focused attention.

Work by Luders and colleagues in 2012 shows that in meditators there is an increased volume of the hippocampus, which is associated with memory functioning, as well as in other areas of the cortex. There is also an increased structural connectivity between regions and more gyrification (cortical folding). Interestingly, recent work by HOlzel et al (2011) shows that changes can be seen very quickly: anyone doing 8 weeks of meditation can increase cortical grey matter density.

Recent evidence shows that a BSR program can lead to changes in one of the brain structures that dealt with emotions: amygdala. In this study, the brains of 26 healthy but stressed individuals were scanned before and after an MBRS intervention. Results showed that reported stress was lower after the intervention and that this reduction in stress correlated with a decrease in the density of an area of the amygdala.

In the clinical world, one of the most studied techniques to alleviate symptoms of depression, stress, and unhappiness is mindfulness-based cognitive therapy (MBCT or MBT). This therapy combines features of cognitive therapy and mindfulness meditation. The goal is to learn how to pay attention without judgement and to recognise feelings that are ineffective and mentally destructive so that one can respond rationally to these feelings instead of reacting to them impulsively. MBCT usually consists of eight weekly two-hour classes with assignments to be completed at home.

To reiterate: meditation is so general a word it is best defined by what it is not. Meditation for wellbeing is not solving your problems, it is not thinking through possibilities, judgments, beliefs, opinions, or reacting to the world and your social milieu. It is accepting, to solve them serendipitously exactly by accepting as perhaps irresolvable and not in need of so much of your mind, or attention.

The next time someone talks about meditation – maybe ask them what kind, as there are so many promising kinds. What kind d’you do, or will you choose? Some meditation enthusiasts do many, many forms. But, personally, I’ve settled for compassion and mindfulness—for now. And research encourages me to not quit when I’m feeling lazy (too often).

I began with Insighttimer, the free community app which offers guided meditations. But am considering doing yoga and Taiji (again) for the combined benefit of friend-making. Practitioners of both benefit from reduced stress, anxiety, depression. And according to The Harvard Medical School Guide to Tai Chi

, have had a positive relief on victims of post-traumatic stress disorder.